If you follow Haiti news at all you’ve probably heard about the “Chicken thing” that has been spreading through the island rapidly in the past month. Chikungunya (chick-uhn-guhn-yah) is a mosquito carried virus that can result in fever, rash, headaches and severe joint pain as well as other symptoms. 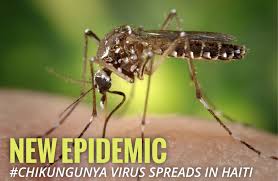 I hadn’t posted anything about this previously because until about a week ago it was predominantly running wild in the major cities, especially the capital – Port au Prince. I didn’t want to sound like someone who knew anything when we hadn’t really seen much of it in our area. At first people were a bit hesitant to call it what it was because it’s symptoms are very similar to Dengue fever, and it seemed to be moving like a hurricane. Literally entire neighborhoods were falling ill with it. Since the first cases hit Haiti early last month it’s literally become an epidemic here. People live in close quarters, most without screens or the money to buy any kind of mosquito repellent. It’s the daytime mosquitoes that get you, so even if you use repellent, sweat and what not cause it to drip off leaving you exposed.

In the past couple of weeks it’s moved out into the rest of the country, including our area. About a week and a half ago our employees started requesting Tylenol for family members, and one of our guards came up one morning looking pretty beat. I asked him about his symptoms – tired and had a fever over the weekend, but no rash. By the end of the day he was in so much pain that he couldn’t come down from the guard tower to open the gate when I was leaving. At the end of his shift he made it down the tower into a chair waiting at the bottom, and Chris pulled the car up to the chair so he basically only had to stand and shift his body weight to fall into the car so Chris could drive him home. A week later he was back at work and looking and acting completely normal. We just found out at the end of last week that one of our employees had it but still managed to come to work every day. How, I have no idea!

I’m part of a Facebook group of expats here in country and the cases of symptoms reported have been in the hundreds. What I’ve learned from those comments is that while there are the typical cases where the fever comes on, followed by extreme joint pain and the rash, there are also milder cases where there may be a very low grade fever to the point that it is almost missed, mild joint pain and other symptoms like headaches and low energy. A couple of our friends have had it and the symptoms like pain and rash came before the fever, or were mild enough that they were up and about after a day of laying low from fatigue.

Anyone living here long term has basically adopted the “when” rather than “if” attitude about when they’ll get it. In some ways it’s almost become a new badge to add to our list of “done that” items – “Have you had the fever yet?”

We were pretty sure that if any of our family got it that Alex would be the first to fall. He runs around in nothing more than a diaper every day and he spends hours at a time out in the work yard with our staff. Chris and I were honestly just bracing ourselves for it. But, Olivia was the first to go down. Midway through last week she started to feel tired, then on Wednesday morning she woke up with a fever and slept on and off for the day. Thursday she seemed a bit better, but had a bit of a rash on her face and complained of achy joints. She was hobbling around here like an old woman and sometimes it was just easier to carry her from point A to B.

Thursday evening I started to feel run down, but needed to go to Port au Prince on Friday. Thankfully I woke up the next morning feeling fine and went on my way. On the way home I started to feel overly tired. Got home, unpacked everything and then gave in. Saturday I just felt beat and spent half the day in bed sleeping. The kind of sleep that feels like an hour but is really four. I didn’t feel feverish at all, but I could have easily had a low grade fever, we just didn’t check. On Friday night my hands and feet started swelling and it brought back memories of months of fat feet while pregnant with Alex. The worst part so far for me has been the headache that settled in Friday evening and was relentless until about yesterday afternoon. I was taking Tylenol and Ibuprofen alternately and it seemed to help a bit, but not completely. Thankfully that combo has helped with joint pain. I was expecting it, so was paying attention and while it hasn’t been horrible, it’s been very much there. It feels random though, like the shin on one leg aching for a bit, then the ankle on my other foot. As I type this my left wrist is aching while everything else seems fine. I was starting to wonder if I was getting sympathy Chicken fever, but today I’ve been itchy all over and a rash has started to show up in various places.

Yesterday Chris started to feel a bit tired, and a bit achy. Yesterday evening a rash started showing up on his back, but we weren’t sure if it was ChickV (as everyone here has started calling it) or heat rash that he often gets in the summer. Today it’s definitely ChickV as he’s feeling more achy and run down, but still able to be up and around doing stuff like normal.

So, Alex wasn’t the first to go down, and so far is showing no signs of it. We’re hoping and praying that remains the case, or that if he is going to get it he gets it in the next 24 hours. Our family is gearing up to travel this weekend on our annual summer vacation and we’re hoping and praying that we’re all through the worst of it (fever stage) before we need to leave.

The good news is that once you get it, you get it once. Basically everyone is just riding the wave, enduring the pain (really!) and knowing that after this first major sweep in the country that cases will drastically diminish and it will be harder to catch because there will be fewer carriers.

We would love it if you would keep Haiti in your prayers, especially the young, the elderly, those with compromised immune systems and women in the early stages of pregnancy or about to deliver. Studies have show that there is vertical transmission with this, which means that expectant mothers can transmit it to their babies if they’re in the labor stage, and those littles can fall ill with it in the first few days of their lives because of that. That can cause complications and possibly even things like cebral palsy. Any fever in an expectant mom in the early stages of pregnancy is danger as well.

If you want to pray for our family, pray that those of us with it recover quickly and that if Alex doesn’t get it before we leave that it stays that way. We are VERY grateful that our cases so far seem to be mild compared to what we’ve heard and we would love for it to stay that way. Some cases, especially in women, show relapses with fever and fatigue, so that’s a concern too especially because we’re traveling.

We’re going to try and rest up this week as much as we can. Thankfully we don’t have a ton of work to do before we leave and we’re not feeling stressed. We just have a few things to wrap up and packing to do, but that’s not even extensive because our kids have pretty much outgrown everything they would wear back in North America and we try to travel back light so there’s more room for stuff on the return.

We’ll keep you posted, and thank you for your prayers for our staff and family!

1 thought on “That Chicken Thing”