We’re a few days into a Vision Trip, and time is a bit limited so I’m going to do a bullet point post of randomness, just for you!

I won’t leave you hanging without telling you about my interesting experience. In a nutshell, I dropped Thony off at a police station on the way to town on Saturday so he could get one of our motorcycles that had been seized because the registration had expired. We thought the police would ask for “storage” fees, and had been advised not to pay. They did, I initially refused, but because we couldn’t get a hold of our contact within the police department for advice we decided to pay, but to take badge numbers in the event that anything needed to reported. In the process of writing down the “chief’s” badge number he got angry that I was doing so, and forcefully grabbed my arm so I couldn’t write it down. I had already finished, and very loudly informed him that I was a resident with all my papers and that I knew I had the right to take badge numbers whenever I felt anything was “off”. After a stare down he let me go and I went back outside. Thony, as well as 6 or 7 other officers had seen and heard the whole things (I was actually intentional about being loud for this reason) so the officer knew that he had made a big mistake. He was later trying to be appologetic, but mostly because he knew he had made a big mistake. I hadn’t been rude or pushy at any point and there was no reason for him to treat me that way, especially not as an official that is there to supposedly serve and protect the population.

We’re going to be following up through the right channels, but not because I want heads to roll or anything like that. We know the corruption that’s within a lot of government offices here, and we try to push against that when we can. Aside from that though, we’re also aware of how regular Haitian citizens are often treated by the police. Let’s just say they aren’t served and protected in most cases. I am a white woman, which sadly brings with it certain advantages. For this to happen to me as a white woman in this country is almost unheard of and would be frowned upon from many sources. BUT, what about all the other people here that don’t have that advantage. How much worse would they have been treated? If following up on this means that officer has to even think really hard about how he conducts himself, then the effort was worth it. If it sets an example that can maybe do a little something about fighting corruption within offices that are supposed to be serving the public, then it will be worth it.

"Life is a succession of moments. To live each one is to succeed."
~Corita Kent 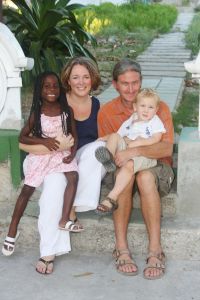 We are the Rollings. In Haiti.

Yep, it's true. We are the Rollings. And we live in Haiti where we run Clean Water for Haiti, a humanitarian mission that builds and distributes Biosand water filters to Haitian families.

Blogging is something we do to share our lives here with people. To talk about the interesting, the hard, the frustrating, and amazing. It's all part of the picture!

To donate and receive a tax receipt please mail your donation to one of the following addresses:

In Canada:
CWH Foundation
Box 51
Armstrong, BC
V0E 1B0

Checks payable to "Clean Water for Haiti" with a note for "Chris & Leslie Rolling Support".